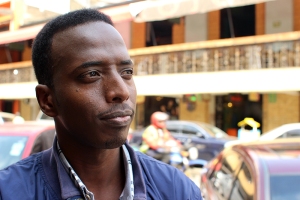 Right now, as you read this blog, there are 60,000,000 people who are displaced because of conflicts in the world. I’ll write that again – 60 million people, the largest number the U.N. has ever recorded! We read about people precariously traveling in overcrowded boats to find refuge, or settling in nearby countries, only to be raided repeatedly by corrupt police. I find it impossible to imagine the stress of these refugees as a mass, but one story I heard today, moved me to tears.

This morning, I listened to one of my favorite public radio programs, This American Life, from WBEZ in Chicago. I heard a story about one such refugee, a Somali living in Kenya, Abdi Nor. The program is called The Golden Ticket. I hope you’ll take the time to listen to his story. You can hear the podcast on your phone or computer. Do take the time. Abdi’s story will take your breath away.

We are introduced to Abdi’s journey with a story about how the United States government offers diversity visas through a lottery program. The idea behind this program is to enable a people with low rates of immigration to the United States to get a United State Permanent Resident Card, i.e., a Green Card.

The first scene we envision is a crowd of people at a cyber café in Kenya. Each person at the computer is hoping that after they click this link to the lottery, they will get the answer they are hoping for – you are qualified to get a visa to the United States!

Our protagonist, Abdi Nor, a Somali refugee joyfully learns that luck is with him. He wins the lottery! He is eligible to apply for a visa to the United States where he has always wanted to settle. His English is so good he barely has an accent. His whole life has been leading up to moving to the U.S. Happy though he is, this is just the beginning of a long story. Abdi’s joy quickly changes to fear and hardship. He has to survive repeated police invasions of his community. When there are attacks by Al-Shabaab, a jihadist terrorist group, the corrupt Kenyan police have an excuse to raid the Somali community; sometimes they take bribes, sometimes they take the refugees away. Abdi and his brother Hassan have to hunker down and hide from the police. Sometimes they go hungry. Sometimes they cannot sleep.

We hold our breath as the days go by before Abdi’s interview at the U.S. Embassy. Will he be able to get his papers before the interview? He cannot be in hiding and get these papers. Will he and Hassan survive the raids?

You’ll have to hear what happens on This American Life through a series of interviews that BBC reporter, Leo Hornak brilliantly records over several months through the computer.

I don’t want to give away the story, but here is one detail that is not a spoiler alert. Hassan, Abdi’s brother is asked if he’s jealous that Abdi has won this visa. Hassan is genuinely and completely happy for his brother. He is not at all jealous. He shows a true generosity of spirit. His shared joy was inspiring!

Now, please go listen to the program. We are all on this planet together and, painful though it is, we need to know what life is like for everyone. Please listen to Abdi’s story.