My husband and I like to relax in the late evening by watching a movie or a television series. Lately we’ve been watching Girls. Have you seen this series? It’s about young twenty-somethings in Brooklyn and their angst over supporting themselves, expressing themselves, their relationships, sex, and life issues in general. We watched a couple Season 2 episodes (and if you comment on this post, please don’t reveal anything . . .we’re taking this slowly), and I woke up thinking about these characters and how self involved they are. As a boomer I ask myself why I would

be interested in such self-involved people. I tend to be judgmental and I don’t like that about myself, but why would I be interested in this program? None of the characters do anything for anyone else. The closest thing to service is that one character is a high-end hostess. Of course, the main character is a writer and perhaps what she is writing will have relevance to others – though perhaps not. At one point she has a writing assignment to get out of her comfort zone, to take cocaine and go wild and write about it. I’m not sure how comfortable I am with that scenario, although, perhaps the idiocy that transpires in the episode is a life lesson we might take from the story. Or maybe she is doing art for art’s sake. As I think that thought I have an “aha” moment! Over the past week I’ve been photographing my old paintings that I’ve had stored in the basement for as long as 30 years. I no longer have room to store these paintings and will be releasing them to family, friends, and non-profit institutions that will display them. This morning I thought about why I had stopped being a painter and chose, instead, to become a humanist Jewish leader and then a rabbi. Here is a short version of the story.

I grew up conservadox, attending a Conservative congregation, but with my mother keeping the law in a more orthodox way than most of the congregants. However, as a teenager I left the orthodox path after witnessing hypocrisy within my community; my civil rights activist rabbi was the first to abdicate to “blockbusting,” moving out of our community at the first sign of an African-American family moving in. I was quite appalled, as only the very young can be appalled; I saw everything in black and white, and had zero tolerance for hypocrisy. It was easy to be disillusioned as an adolescent. 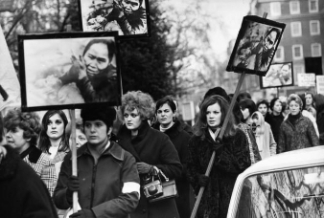 When I went to college and became active in the anti-Vietnam War movement, I thought about World War II, and believed that as a Jew it was my obligation to take a stand, and not let a people be destroyed the way my people was destroyed in Europe. My activism was first curbed by the dominant-male personalities of the leadership within the student left. I joined the women’s liberation movement, assuming that women would be more respectful than men. Of course I was wrong. I discovered that to simply state what you believe is right, and to fight to create change without looking within oneself, can be counterproductive. One doesn’t change other people’s minds unless one totally respects the other person, whether or not they agree with you. To nurture the ability to hear another person requires a great deal of effort and skill. At the time of my disillusionment with political activism I wasn’t ready for the task, and I turned to create my own world of paintings. This didn’t require any effort on my part to change anyone but myself. I painted some beautiful paintings, showed these in galleries, received a fair amount of acknowledgment for my efforts, but felt dissatisfied—I think, at least in part, because I was raised as a Jew with a sense of obligation to a community (and not just a community of art lovers).

If you’d like to see more of these you will find them here: jubusuart.wordpress.com

So, if I wasn’t going to change the world through political activism or art what did I need to do? At the same time that I asked myself this question, my daughter completed a multicultural curriculum at her public school. She became interested in her own cultural roots. It was time to look for a Jewish community for my children! I searched and found a local chapter of the Society for Humanistic Judaism and we all went to Yom Kippur services. This was the beginning of a long involvement with humanistic Judaism. This involvement led me back home to my Jewish roots. Soon after joining Kol Hadash, I was asked to go for training to become their leader. I completed this training in 2 years and led the group for 5 years.

Check out shj.org to learn more about Humanistic Judaism

Acting as a spiritual leader for Kol Hadash was a challenging and rewarding experience. I found, however, that the more I learned about Judaism, the more I didn’t know. After stepping down from my leadership role in Kol Hadash, I embarked on a journey of Jewish learning that brings me to today. My Jewish learning led to my ordination as a rabbi in November 2014 and will be a permanent part of my life.

Now, I, the rabbi, take the painter’s, my, paintings and photograph them. I lift each heavy painting out the side door of my house, haul it onto a bench, lean it against the house, and take a photograph. I go back and forth more than 30 times over a week. Sometimes I gasp at the beauty of the piece and this brings me into a spiritual zone that I was in when I produced the painting. Perhaps my criticism of Girls is really a suppression of the artist in me. We humans are complex. We can be personally creative and socially responsible. I hope that by my age I can learn to think in grey and not just black and white!

1 thought on “From black and white to grey”